Its a serious disease, and I have it! I believe it is quite possibly genetic, passed down from my mother, but I have managed to mutate the disease to a whole new level, and I fear I will never be cured!

I always knew it lurked within me, I tried to ignore it, but last week I did have a breakthrough, and discovered WHY it has such a firm hold. When there is time to spare (more that a day...), my brain will just not sit still. It wanders, shamelessly I might add, and CANNOT focus! I drive myself crazy with this, I know I SHOULD be doing something in particular, but find myself doing something else, usually the exact opposite. It is not until something absolutely positively has to be done with no time to spare, that I can focus like a genius. I always manage to pull it out of the hat, but get so frustrated with myself for making so much more stressful than it needed to be. But it was a bit of a lightbulb moment, realising that this is why I do it. That because with limited time, it is the only time my brain will not wander.

The story was that I was teaching a paper piecing hexagon class last Thursday night. It was only a technique class, but I still wanted to have a little sample made up of something they could make, and had promised a pattern to go with it. So, about 9pm Wednesday I started stitching some hexies together (after going through fabric... preparing hexies..). I stayed up until approx midnight joining about 25 together. Thursday was student free, so amongst other things, I finished joining hexies about 4pm. Starting making project about 4.30pm, finished about 5.15pm. Then after making dinner and picking hubby from the train station had pattern finished around 6.35pm (class STARTS at 7pm). mmmmmm, no time for printing at home, so email to the shop, run to shop, (drive actually) open, print, greet, teach! See? easy, almost had time to spare too!

So this week, out come the lists again! The strategy being to write very small achievable things on my list. Instead of "write pattern for .... quilt" (which is no small task), I wrote "write requirement list for ..... quilt". A lot more achievable, so hopefully this will head me on the right direction.

Incidentally, this is the project I made. I wanted something a little more contemporary as I could easily show photos of the more widely used way of using hexies. Daughter #1 wanted to know if I had run out of hexies! The cheek! It WAS meant to be this way! 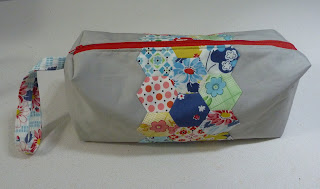 Have a great week,
Michelle x
Posted by Michelle at 10:59 AM 8 comments:

What makes me smile...

Many things make me smile, but in particular this morning, I am referring to yet another of my little 'Elsie finds'. She plays in imaginary land so beautifully, and as a result I am often treated to these little 'scenes' set up all over (literally!) the house. I try very hard not to think about the day when I will no longer find these as it is just too sad, but in the meantime I will revel in them, photograph them, and occasionally share one here.. 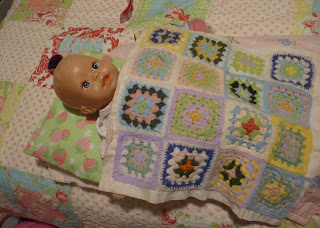 This one particularly played into my handmade vintage loving heart. The little doll quilt here, was mine, and was made for me by my beautiful Grandma. She made one for my two older sisters and I, and we each had a different coloured surround. Mine was pink, and I think Jane and Suzanne's were lavender and lemon. The also came with a little matching pillow.

It is so special to me to know that Elsie is playing with something made by her great Grandmother, someone who would have loved her to bits! It keeps that link alive. It is precious, and I could put it up in a cupboard to keep it safe, but then it wouldn't be nearly as special. It was made to use, and love and keep dolls warm, and I couldn't be happier that this gift from Grandma is still living on.

I have discovered the love of free motion quilting over the last couple of years. And once I got the hang of it I have found it fun, additive and amazingly therapeutic! But I do liken it to going from learning print writing to cursive, and you will not be neat, or consistent without practice! practice! practice! One of the best bits of advise I can give is to doodle! .....What?... yep..doodle! It is a very close relative to free motion quilting, and once you can get your mind into that way of thinking, I think you can relax a little. Like doodling, it will wander from one place to the next, with the odd mistake along the way.

When starting a new project I always 'doodle' on paper first to get the feel for what I want to achieve. If your not sure what pattern or design to quilt, look at the fabric for inspiration. For my "birds in the air" quilt, I wasn't sure what to do, (the last 3 quilts have been my standard 'swirly' design, so I looked at the backing fabric which featured butterflies with loops, so basically went with that. 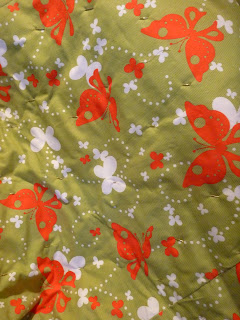 I doodled a similar idea, and once confident with this, it can be translated to fabric. 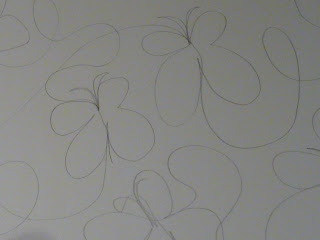 Use a practice piece first if your still learning, but the main thing is to relax, and not be tough on yourself. Remember you are looking at your quilting in close up detail and you will be by far your hardest critic. Remember to stand back every now and then and ask yourself "if my friend showed me that, what would I say?". I bet the answer is far kinder than what you say to yourself when you look close up! 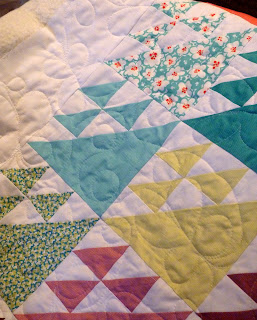 So far, this is what my quilt is looking like, and I'm pretty happy with it. I am by no means an award winning free motion quilter, and never will be, but what I do is simple and fun, and I enjoy it. AND! it beats trying to 'ditch stitch' around all those half square triangles any day!

Not too much longer I hope!

Michelle
I am a passionate quilter and have decided to follow my dream by designing, creating and publishing my own patterns. I am lucky enough to work in a wonderful Quilt Shop, called "The Quilter's Corner", in Brisbane. This means I am constantly inspired by the gorgeous new fabrics that surround me. Most importantly I am married to a wonderful man, and mother to three beautiful daughters!